No Increase in Breast Cancer Risk in BRCA1 Carriers on HT 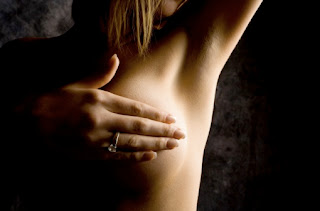 Can you tell I'm catching up on my journal reading? I've got several patients with the "breast cancer gene" or have a high risk for it (2 or more relatives with breast cancer), so this latest data showing no increased risk of breast cancer in BRCA1 carriers on Hormone Therapy is GOOD NEWS.

Using hormone therapy (HT) is not associated
with an increased risk for breast cancer in
postmenopausal women with a BRCA1 mutation,
this study suggests. In fact, researchers found a
decreased risk with HT use among this small
cohort with the mutation. Participants were
drawn from the larger cohort of the Hereditary
Breast Cancer Clinical Study, a prospective study
to evaluate nongenetic modifiers of cancer risk in
BRCA1 and BRCA2 mutation carriers. Cases
were diagnosed with invasive breast cancer after
reaching menopause. Controls had experienced
menopause and did not have breast cancer. Cases
and controls were matched for year of birth, age
at menopause, and type of menopause; 236
matched sets with the BRCA1 mutation were
generated. A questionnaire administered to each
woman garnered information on medical and
reproductive history and past and current HT use
(average age, 58.2 y; range, 32-85 y). The study
analyzed whether HT use after surgical or natural
menopause is associated with subsequent risk for
breast cancer in women with BRCA1 mutation.

Comment. There is a growing body of
evidence suggesting that the premature loss of
ovarian function caused by bilateral
oophorectomy performed before natural
menopause is associated with several negative
outcomes including an increased risk of
premature death, cardiovascular disease,
cognitive impairment or dementia,
parkinsonism, osteoporosis and bone fractures,
decline in psychological well-being, and
decline in sexual function. HT use may prevent
some but not all of these negative outcomes.
After receiving a positive genetic test result,
68% of women in the United States and 54% of
women in Canada with a BRCA1 or BRCA2
mutation undergo oophorectomy.1 The surgery
has been associated with risk reductions of 50%
or more for breast cancer and of 80% for
ovarian or peritoneal cancer. Some women
might be reluctant to undergo premenopausal
oophorectomy because of the adverse effects of
surgical menopause and are concerned that if
HT were taken to alleviate symptoms, then
their risk of breast cancer might rise.

The majority of BRCA1-associated breast
cancers in the current study (68%) were ER-. If
the adverse effect of HT were limited to ER+
cancers, then we would not expect to see an
acute effect of similar magnitude in mutation
carriers. It may be also that HT use protects
against the early stages of cancer development,
which results in a decline in the incidence of
breast cancer later in life. Published studies show
that in the noncarrier population, the increased
breast cancer risk associated with HT appears to
be stronger for ER+ cancers than ER-.2 If HT
were a risk factor for ER+ breast cancer in
BRCA1 mutation carriers as well, one would
expect that a greater proportion of women with
ER+ breast cancers had used HT than women
with ER- breast cancers. This was not seen, and
these findings suggest that the use of menopausal
HT is not associated with an increase in the risk
of breast cancer among women with a BRCA1
mutation, but the numbers of cases known to be
ER+ are too small to draw a definite conclusion.

Editorial writers have argued that the results
presented by Eisen et al regarding HT use in
postmenopausal BRCA1 mutation carriers
provide some evidence for safety but are
insufficient to reliably inform routine clinical
practice.3 Decision making regarding menopausal
HT in women at increased risk of breast cancer is
complex. The current HT package insert
identifies climacteric symptoms as the main
indication of HT use at the lowest dose and
shortest duration consistent with therapeutic
goals. We do not know how many post-
menopausal women with BRCA1 mutations have
limiting symptoms of hot flashes, vaginal/vulvar
problems, and/or sexual dysfunction that
cannot be addressed using nonhormonal
approaches, nor do we know how to define the
term “limiting” as a threshold for HT use.

Eisen et al say that it is not possible to
recommend an optimal duration of HT, but some
experts (eg, the National Comprehensive
Cancer Network) have suggested that “short-
term hormone replacement therapy” be
prescribed until the time of natural menopause
(ie, age 50-54).4 After that age, consideration
should be given to the use of tamoxifen for
breast cancer risk reduction. In mathematical
models, prophylactic oophorectomy lengthens
life expectancy in women with BRCA1/2
mutations, irrespective of whether HT is used
after oophorectomy. Women with BRCA1/2
mutations who undergo prophylactic
oophorectomy after completion of childbearing
should decide about short-term HT based
largely on quality-of-life issues rather than life
expectancy, and consider discontinuing
treatment at the time of expected natural
menopause, approximately age 51.