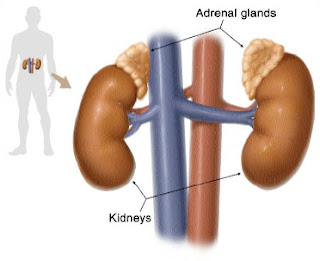 This is a fantastic review of Adrenal Dysregulation (aka "Adrenal Burn Out" or "Adrenal Fatigue" in other circles) by our Portland neighbor and wise doc, Tori Hudson, ND. Stop that coffee, People! Drink yerba mate or green or white tea!

Adrenal functions and stress adaptation mechanisms are among the most far reaching network of endocrine, nervous and immune system interactions regulating our life. The HPA glands and their interactions are responsible for the secretion of critical hormones vital to the control of carefully orchestrated production, synthesis and communication of these hormones. In response to stress, the hypothalamus secretes corticotropin-releasing hormone (CRH) that then stimulates the anterior lobe of the pituitary gland to secrete adrenocorticotropic hormone (ACTH). ACTH then reaches the adrenal cortex and cortisol is synthesized and secreted into the bloodstream. This hormone, cortisol, is the major glucocorticoid that acts as both mediator and inhibitor of the stress response. Cortisol is an insulin antagonist and maintains blood glucose levels by inhibiting glucose uptake and oxidation.[i] Its enhancement of catecholamine release leads to improved cardiac function and blood flow. Cortisol also suppresses collagen synthesis, osteoblast activity, hematopoiesis, protein synthesis, immune responses and kidney function.

Under usual circumstances, our stress response, and the acute/alarm phase is temporary. The HPA axis is under negative feedback control from cortisol. Cortisol then is the primary regulator of the HPA axis with negative feedback on ACTH and CRH, exerting its control of both the hypothalamus and the pituitary gland. Under prolonged stress or increasing intensity of the stress, the HPA axis no longer responds to this negative feedback. This prolonged stress response can then cause continuous cortisol synthesis and chronically elevated cortisol levels. In this state of prolonged stress, increased cortisol levels are linked to metabolic syndrome, overweight and obesity, chronic fatigue syndrome, chronic inflammatory states, coronary artery disease, anxiety, insomnia, depression, and more. This is referred to as the resistance phase of the stress adaptation syndrome. If allowed to persist, there is a significant increase in risk of these diseases. This can also lead to the final stage of the stress adaptation syndrome, i.e. exhaustion. This exhaustion phase may manifest as more acute and serious collapse of vital organ systems and functions.

A comprehensive medical and social history will be the primary tool that will help to identify our patients' phase of stress. Physical exams and select laboratory testing will help to determine not only underlying causes of stress, but also help to diagnose current diseases and to evaluate for risk factors for other significant concerns. This in turn will help with prioritizing treatments and strategizing risk reduction with the goal of restoring hypothalamic-pituitary-adrenal balance.

Many, if not most of the manifestations of chronically elevated cortisol, are more common in women. For example, chronic fatigue syndrome (CFS) occurs more frequently in women than in men. Most commonly, the onset is between 20 and 40 years of age. The majority of patients are middle class and in the helping professions such as nurses, doctors and teachers. Overweight, obesity, insomnia, depression, anxiety and metabolic syndrome, all associated with chronically elevated cortisol levels, are also among the health disorders more common in women. In addition, the hormonal influences of premenstrual syndrome, postpartum, perimenopause and menopause add another layer of complexity and interaction unique to women and adrenal regulation.

It is this chronically elevated cortisol state, most easily identified with salivary cortisol testing, that I wish to address in the rest of this article.

The most effective way to manage chronically elevated cortisol levels is to ensure that the adrenal glands are supported with the proper nutrients. Vitamin B6, pantothenic acid, and vitamin C, often become depleted when the demands on adrenal gland cortisol production are continuous. An abnormal adrenal response, whether it is deficient or excessive hormone release, can be in large part addressed with these key nutrients. These nutrients play a critical role in the optimal function of the adrenal gland and in the optimal manufacture of adrenal hormones. Levels of these nutrients can be diminished during times of stress. Urinary excretion of vitamin C is increased during stress. A deficiency of pantothenic acid results in fatigue, headaches, insomnia and more. L-tyrosine and L-theanine support the adrenal glands by combating fatigue and anxiety related to stress. In addition, the cortisol feedback control mechanism is dependent on adequate amounts of calcium, magnesium, potassium, manganese and zinc.

Ashwaganda (Withania somnifera), also known as Indian ginseng, has been in historical use in the Ayurvedic medical system for over 3,000 years. Ashwagandha has been shown to reduce corticosterone, a glucocorticoid hormone structurally similar to cortisol., An array of clinical trials and laboratory research also support the use of ashwaganda in enhancing mood, reducing anxiety and increasing energy. , , 10 ,

Magnolia (Magnolia officinalis), also known as Holly Bay and White Laurel, has been historically used for weight loss, obesity, anxiety, stress, depression and inflammation. A randomized, parallel, placebo controlled study in overweight premenopausal women resulted in a decrease in transitory anxiety, although salivary cortisol levels were not significantly reduced. Through some of its reported antidepressant and anxiolytic effects, magnolia can improve mood, increase relaxation, induce a restful sleep and enhance stress reduction.

A proprietary blend of two plant extracts, one from Magnolia officinalis and the other from Phellodendron amurense has shown promise in lowering cortisol. In initial evaluations, by the research and development company behind this proprietary product, they found that eight out of 10 stressed individuals felt more relaxed, seven out of 10 enjoyed more restful sleep, and nine out of 10 said it was gentle on the stomach.

In a study conducted at the Living Longer clinic, in Cincinnati, Ohio by Dr. LaValle, (unpublished), the same proprietary blend was shown clinically to normalize the hormone levels associated with stress-induced obesity. It was demonstrated that this combination lowered cortisol levels by 37 per cent and increased DHEA by 227 per cent.

Phosphatidylserine (PS), also known as lecithin phosphatidylserine, is a fat-soluble phospholipid that is the most abundant phospholipids in the human brain. PS is a component of the mitochondrial membrane where it serves as a reservoir for other phospholipids. It is vital in neuronal membrane functions, signal transduction, cell-to-cell communication, cell growth regulation and secretory vesicle release. We obtain most of our PS from dietary sources, although we do synthesize PS as well. PS is known to blunt the rise in cortisol and ACTH following strenuous training, and significantly reduce both ACTH and cortisol levels after exposure to physical stress. Phosphatidylserine also has been shown to improve mood.

Combinations of the above mentioned ingredients can be used together and in multiple ingredient formulations as part of a whole system approach to correcting adrenal dysregulation with elevated cortisol levels. In a recent unpublished study of another proprietary formula, study subjects took a product containing ashwagandha, phosphatidylserine, magnolia and L-theanine. The nutritional/botanical supplement consistently decreased salivary cortisol levels in relation to baseline levels. In addition, participants reported increased relaxation, improved sleep, deeper sleep, and reduced stress levels.

Numerous other adaptogens may be considered in cases of adrenal dysregulation. Traditional herbal definitions of an adaptogen states that an adaptogen is an agent that produces a nonspecific response to counter physical, chemical or biological stressors, thus allowing the body to "adapt" to the stressful circumstance. This normalizing influence on physiology is irrespective of hyperfunction or hypofunction of an organ or organ system. Western botanical researchers look at the effect of adaptogens on regulating the hypothalamic-pituitary-adrenal axis and use them to regulate the neuroendocrine and immune systems. Adaptogenic herbs support the entire neuroendocrine system, in particular the adrenal function and the stress response, which results in a modulating and regulating effect on the use of cortisol. Adaptogens known for their anti-stress qualities and stabilizing effect on the HPA axis include American ginseng, ashwagandha, Asian ginseng, astragalus, cordyceps, reishi, eleutherococcus, holy basil, rhodiola, schisandra, and licorice. Again, combination/multi-ingredient formulations are common in a whole system approach to restoring adrenal regulation.