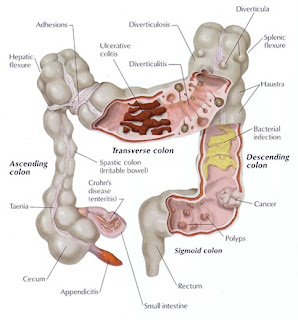 Here's another post from North American Menopause Society. Seems cyclic progesterone was associated with the greatest risk reduction of colon cancer. Check it out.

We evaluated colorectal cancer risk associated
with the duration and recency of specific
menopausal hormone therapy formulations (ie,
unopposed estrogen versus estrogen plus
progestin) and regimens (ie, sequential versus
continuous estrogen plus progestin use) among
56,733 postmenopausal women participating in
the Breast Cancer Detection Demonstration
Project follow-up study. Hormone therapy use
and other risk factors were ascertained through
telephone interviews and mailed questionnaires
from 1979 to 1998. The final cancer group
included 960 women who were identified from
self-report, medical records, state registry data,
and the National Death Index. Poisson regression
was used to generate multivariable rate ratios
(RR) and 95% confidence intervals (95% CI).
We observed a decreased risk of colorectal
cancer among ever users of unopposed estrogen
therapy (RR, 0.83; 95% CI, 0.70-0.99). Among
estrogen users, the largest reduced risk was
observed for current users (RR, 0.75; 95% CI,
0.54-1.05) and users of ≥ten years duration
(RR, 0.74; 95% CI, 0.56-0.96). We found a
reduced risk among users of estrogen plus
progestin therapy (RR, 0.78; 95% CI, 0.60-
1.02), with sequential regimen users (progestin
<15 days per cycle) having the largest risk
reduction (RR, 0.64; 95% CI, 0.43-0.95). Past
users of ≥5 years ago (RR, 0.55; 95% CI, 0.32-
0.98) had the largest risk reduction. In this
study, estrogen plus progestin use, especially
sequential regimen use, was associated with the
largest overall reduction of colorectal cancer
risk.

Comment. This is a retrospective study, the
stated purpose of which was to identify
separate risk estimates for colon cancer
according to menopausal hormone form-
ulations. A paper published 9 years earlier1
from the same database found a suggested
inverse relationship between the use of HT and
colon cancer. The current paper analyzed
postmenopausal women divided into groups of
never users, those who had ever used estrogen,
and those who had ever used estrogen plus
progestogen (EPT), and then further divided
them by sequential hormone use and length of
time exposed to HT. What the current authors
found was that those who had ever used
unopposed estrogen had a decreased risk of
colon cancer. Those who had used sequential
EPT had the largest risk reduction. What does
this information add to our knowledge of this
topic?

Estrogen receptors have been detected on colonic
cells, with estrogen-receptor β being over-
expressed in healthy colon cells and reduced in
colon cancer cells. This overexpression, coupled
with negligible expression of estrogen-receptor α,
is thought to provide protection by HT against
colon cancer. What is also known is that
prescribing patterns for HT vary among race,
with African-American, Asian, and Latina
women receiving less treatment than Caucasian
women. An evaluation of how many women
were represented in each group rather than a
designation of “nonwhite” and a designation of
“person-years” only would have been
informative. It would also have been beneficial if
the groups had been matched by age, ethnicity,
and HT use (perhaps this is a paper that will be
published later).

African-American women have the highest risk
for colon cancer, higher even than white males;
and colon cancer in these women is often
detected at a more advanced stage. If HT really
does reduce the risk of colon cancer, all women
should have a discussion with their healthcare
provider about the potential benefits of HT for
them. A prospective study of matched groups of
women would be very informative regarding risk
reduction across ethnic groups in which there is a
dearth of comparative information available.
Women who use HT are more likely to have
mammograms, as well as Pap smears and
colonoscopies. Colonoscopy, however, is still at
the bottom of the list even for women who
regularly undergo other types of health screening.
It would be helpful if healthcare providers
encouraged women to have a colonoscopy. It has
been shown that if a healthcare provider strongly
recommends a test, a patient will often agree.

As March is National Colon Cancer Awareness
Month, this might be a good time to consider a
large-scale prospective randomized trial of HT
use with timed colon cancer screening across
ethnic groups by those in this field.
Michelle Inkster, MD, PhD
Department of Gastroenterology and Hepatology
Cleveland Clinic
Cleveland, OH