Note to Self: Stop Attacking Thyroid 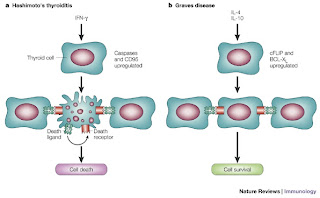 Do you make antibodies against your thyroid? 38% of patients do.

Many of us eye our thyroid with great malice as we bounce around with our TSHs and thyroid symptoms owing to autoimmune thyroiditis (also known as Hashimoto's, named after the Japanese man who described it years ago). Turns out we may be eye-ing the wrong system. It's actually the overzealous immune system that is to blame, and your thyroid is the innocent victim of the infiltrating immune infantry.

Really? How often are we talkin’?


Just read a study of women who came to an integrative medicine practice in Texas – 38% of them, many with no symptoms yet, had positive antibodies to their thyroid.
Yikers. We’re talkin’ common. If you’ve been diagnosed with hyperthyroidism that later normalized or have a TSH that is all over the map despite steady treatment, consider this possibility.  Having an elevation in your thyroid antibodies goes by many names – autoimmune thyroiditis, Hashimoto’s (after the Japanese dude who first described it), chronic lymphocytic thyroiditis (which sounds a little too close to lymphoma for my taste).
Break It Down for Me, Doc: What Does It Really Feel Like?
What I see most often among women with autoimmune thyroiditis is palpitations (due to their thyroid getting stimulated by the antibodies). Some women have a lovely yin/yang flip between depression/fat/exhausted/no libido/can’t crap to anxiety/can’t sleep/palpitations. Others have swelling of their thyroid – diffuse, mild enlargement as the gland fills with white blood cells called lymphocytes.
Gender Inequity
Like most autoimmune conditions, when your immune system gets into overdrive and starts attacking your own tissues as if they were the enemy, women are disproportionately affected.  This applies to celiac, lupus, Grave’s, and rheumatoid arthritis, to name a few. In fact, we outnumber men with autoimmune disease by 3:1. Why is this so? First thing that comes to my mind is our estrogen/progesterone balance and estrogen dominance – turns out estrogen dominance, too much estradiol compared to progesterone, is a key cause of autoimmunity. Pregnancy also appears to put us at greater risk – perhaps because of our exposure of our immune system to our fetus’ cells.
Who You Calling Titer?
Do you know your antibody count (or titer, your level of thyroid peroxidase antibodies, known affectionately as TPO, and thyroglobulin antibodies)? Do you have a program either to keep the titer low or lower the elevated titer you have?
Say you have a TPO of 500… let’s explore ways to get the titer down, which will make your thyroid ride far more manageable and predictable.
Drop That TPO
How do you get your immune system to back off, which we can measure as decreased antibody count? Rather than stop it in its tracks, as we do in conventional medicine with big guns like steroids, I prefer to look at root causes and focus on reducing inflammation. Inflammation = bad.
One strategy that’s incredibly effective is simple: give thyroid hormone. In a study of folks with autoimmune thyroiditis and normal TSH, half got thyroid medication and the other half got nothing’. Those who got thyroid treatment had lower antibody counts after one year.
There are many additional strategies, many aimed at trying to get your immune system to chill the F out. Here’s how they roll.
For more details on how to diagnose autoimmune thyroiditis, check out Mary Shomon’s superb books and website. Here’s one link.
TTFN - time to take my selenium.
Posted by Dr. Sara Gottfried, MD at 11:20 AM

So why the high THS and what to do about it?