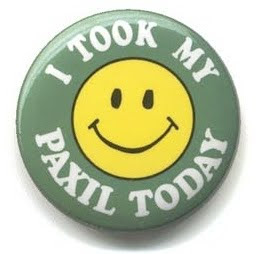 Yesterday's British Medical Journal published a scary article that demonstrates a long-held concern that SSRIs interfere with the breast cancer prevention of tamoxifen. "Paroxetine (Paxil) use during tamoxifen treatment is associated with an increased risk of death from breast cancer, supporting the hypothesis that paroxetine can reduce or abolish the benefit of tamoxifen in women with breast cancer." The body of evidence associated with the adverse effects of SSRIs is increasing to the point where I only recommend them if you have SEVERE depression.


Participants Women living in Ontario aged 66 years or older treated with tamoxifen for breast cancer between 1993 and 2005 who had overlapping treatment with a single SSRI.

Main outcome measures Risk of death from breast cancer after completion of tamoxifen treatment, as a function of the proportion of time on tamoxifen during which each SSRI had been co-prescribed.

Results Of 2430 women treated with tamoxifen and a single SSRI, 374 (15.4%) died of breast cancer during follow-up (mean follow-up 2.38 years, SD 2.59). After adjustment for age, duration of tamoxifen treatment, and other potential confounders, absolute increases of 25%, 50%, and 75% in the proportion of time on tamoxifen with overlapping use of paroxetine (an irreversible inhibitor of CYP2D6) were associated with 24%, 54%, and 91% increases in the risk of death from breast cancer, respectively (P<0.05 for each comparison). By contrast, no such risk was seen with other antidepressants. We estimate that use of paroxetine for 41% of tamoxifen treatment (the median overlap in our sample) would result in one additional breast cancer death within five years of cessation of tamoxifen for every 19.7 (95% confidence interval 12.5 to 46.3) patients so treated; the risk with more extensive overlap would be greater.

Conclusion Paroxetine use during tamoxifen treatment is associated with an increased risk of death from breast cancer, supporting the hypothesis that paroxetine can reduce or abolish the benefit of tamoxifen in women with breast cancer.
Posted by Dr. Sara Gottfried, MD at 6:33 AM