After the past 6 weeks hangin' with the goddesses, I've decided to broaden Goddess Mondays into Mystic Mondays. Still the same theme song: transform an otherwise dreaded day-of-the-week into a luxurious exploration of divine potential and archetypes. Today I studied, invoked and got a mani/pedi with both two Hindu goddesses -- Radha, goddess of love, and Kali, the fierce goddess of battle, carrying a sword dripping in blood of the severed ego.

Problem is, I was deterred from Mystic Mondays for a while by Caroline Myss' comments about the "Mystic" archetype in her book, Sacred Contracts. I find her comments too male and patriarchal. See what you think.

Perhaps no archetype is more coveted by my students or more misunderstood than the Mystic. Many want to believe that they have mystical inclinations, yet underestimate how arduous the genuine mystical path is. When they find out, they're usually happy to let someone else have this role. The lives of the world's great mystics have often included extraordinary states of consciousness, such as prolonged ecstatic trances, and preternatural abilities of prerecognition or bilocution. Yet they also contained sometimes great physical as well as spiritual suffering, hard work, and mundane activities that made up much of their days. If you truly want to name this archetype as part of your sacred consortium, ask yourself if you are ready to pay the price in blood, sweat and tears. If mystical consciousness is something you engage in once a day during meditation, or on a weekend retreat or a yoga workshop, you may be a spiritual seeker, but not a Mystic. The single-minded dedication of the Mystic carries over to the Renunciate, who relinquishes material desires and ambitions to pursue spiritual practices; the Anchorite, who withdraws from the world almost entirely to follow a similar path; and the Hermit, who withdraws from others to pursue a solitary life, although not always for spiritual purposes.

I was very blessed a few weeks ago to be gifted a book by a beloved patient, The Unknown She by Hilary Hart, which contains the voices of many modern mystics from around the world. The first mystic interview, with Angela Fischer, fascinated me: Angela described mysticism and sacred feminine consciousness as being a path that one defines within the swirl of husbands, kids and other loved ones, not separate from them. She helps women come into contact with their deeper essence, and offers a path that is grounded in our "householder" lives and ordinary, rounded, seamed bodies - which is very different than the Hero's Journey described for men.

Men's journeys are of course toward themselves, but at the same time they seem to journey away from themselves, leaving their bodies behind. They master... ascetic trials like fasting, physical endurance, and controlling sexuality. And we consider these as general spiritual practices, not recognizing that they might be inappropriate for women. Women often don't need these practices, because they stay where they are; their connections within life, within the created world, provide the ground for their transformation. Our bodies can be included because they do not need to be purified as men's do; they are already pure.

All righty, then. Sounds like I can still aspire to mysticism or at least spiritual seeker status and try to carve a more uniquely female path, a broader more inclusive path than Caroline had in mind. In her defense, she wrote Sacred Contracts in 2001. 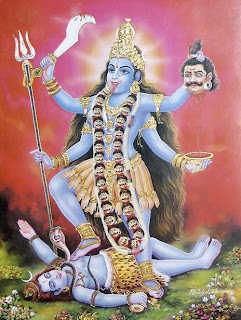 Meanwhile, I'm having a blast on Mondays, getting to know the goddesses, shamans and other mystics I am drawn toward, seeking qualities I need to develop myself and those that are under hormonal influence, from love to bonding to sacred destruction. Let me know if you have a fave mystic that I should be looking into. Did I mention that I wear MBTs, not Manolos Blahniks? Just didn't have the same ring to it....
Posted by Dr. Sara Gottfried, MD at 5:52 PM