Are Those Pearls on your Ovary? 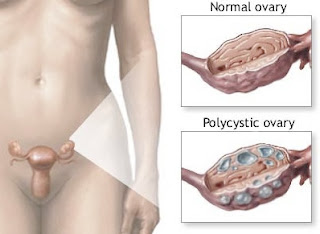 Polycystic Ovarian Syndrome (PCOS) is a problem of hormonal imbalance that creates sputtering ovulation and hyperandrogenism (too much male hormones, which causes increased male-pattern hair growth and acne). Most important in the diagnosis is exclusion of other causes, as no single lab result leads to the diagnosis. Over 6-10% of women have PCOS.

Other findings include multiple cysts on the ovary (called the “string of pearls” sign on ultrasound - see image below), overweight or obesity, high blood pressure, and acanthosis nigrans – a weird skin finding of darker, velvety skin on the back of the neck. 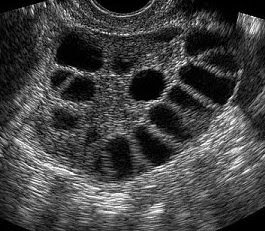 While the cause is unknown, we mostly consider PCOS to be a metabolic problem. About half of women with PCOS have high insulin levels (or hyperinsulinemia). Lowering insulin levels with exercise, eating low-glycemic foods, and other measures can correct erratic ovulation. Some of the natural therapies that have been shown to be helpful in PCOS include bioidentical progesterone use and cinnamon. Tieraona Low Dog, MD, showed in a small study published in Fertility and Sterility in July 2007 that cinnamon (0.5 teaspoon per day) lowers insulin resistance in PCOS.

I want to emphasize the role of exercise – it’s essential in PCOS, no exceptions! I recommend 30 minutes per day, 4 to 5 days per week, of cardio exercise at a minimum as the primary treatment.

One of the findings of PCOS is estrogen dominance – too much estrogen versus progesterone. Reducing estrogen levels can be very effective and I suggest the following measures:

• Cruciferous Veggies: increasing consumption of cruciferous vegetables, such as broccoli and brussel sprouts, which increase metabolism of estrogens.

• Gluten-free: reducing gluten lowers your estradiol levels by 30% or more.

Women with PCOS are at greater risk of type 2 diabetes and metabolic syndrome, and should be additionally screened with glucose testing and a full fasting lipid profile.
Posted by Dr. Sara Gottfried, MD at 11:04 AM