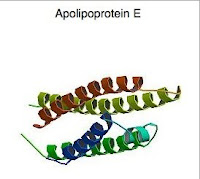 Apolipoprotein E4 (APOE4) is a genetic risk factor for development of late-onset Alzheimer's disease. Caucasian and Japanese carriers of 2 e4 alleles (i.e., you got a bad gene from both parents) have a 10- to 30-fold increased risk of developing AD by age 75 compared to lucky individuals not carrying any e4 alleles. The gene is encoded on chromosome 19.

More good news: it is associated with a 40-50% increased risk of cardiovascular disease. And fish oil doesn't help - in APOE4s it may raise LDL and lower HDL.

The following is from Medscape authoress Ekaterina Rogaeva, PhD.

Nevertheless, genetic testing based on the APOE epsilon 4 allele is ambiguous when used as the sole criterion to diagnose AD since not all epsilon 4 carriers will develop disease and epsilon 4 association is not entirely specific to AD. However, in the future, APOE genotypes could be useful in combination with other clinical measures or genetic variations. Indeed, in at least half of AD cases there is no known cause of the disease, suggesting the existence of additional environmental and genetic factors responsible for late-onset AD.